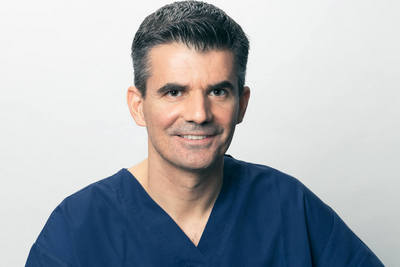 Konstantinos Tsoutis was born in Athens, in May 1978. In June 1998 he enrolled in the Dental School of the University of Athens.

In 2003 he graduated from the Dental School.  During 2004, he did his military service exercising general dentistry in the Navy Training Center on the island of Poros.

In 2005, he enrolled in the Master's Program for specialization in Clinical Prosthodontics, which he completed in 2009 with a grade of "Excellent".

In 2013 he entered the one-year “Dental Sleep Medicine Mini-Residency” presented by Tufts University School of Dental Medicine and the American Academy of Craniofacial Pain for the dental management of TMDs and sleep disorders.

Since 2006 he maintains a private dental clinic oriented in Clinical Prosthodontics, Implantology, TMD and sleep apnea treatment located in the center of Athens.

In 2008 he became a Clinical Instructor of the Dental School of Athens. Ever since, he has been contributing to the clinical training of undergraduate and postgraduate students in the field of Prosthodontics.

He has published numerous scientific papers in Greek and international dental journals.

He is a member of the Greek Society of Prosthodontics, the Association of Contemporary Dentistry and the American Academy of Dental Sleep Medicine.